If you had told people in the City at the height of the financial crash in 2008 that it would take almost nine years for the first top bankers to face prosecution, few would have believed you. If you had then said that this first prosecution would relate to suspected fraud over one bank’s supposed attempt to avoid nationalisation – rather than the crash itself – the bankers involved in the crisis would have laughed in disbelief: surely, they aren’t going to let us get away with that? 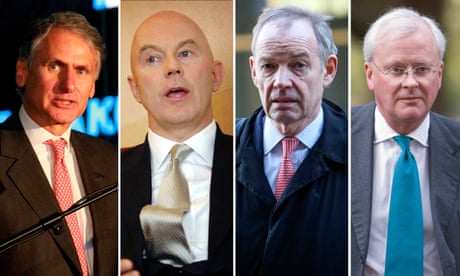 But they did: the bankers who played a central role in the worst crash of the postwar era walked away with their fortunes and freedom intact. Even worse, the fundamentals of the system that made it possible were retained intact.

It is feasible that some of the top brass at Barclayswill now go to jail for the way they raised billions from Qatar to avoid a government bailout – though the accused deny breaking any laws.

Yet ultimately it is of little consequence how this case plays out. The main outcome of the crash is that the DNA of the system that nearly destroyed the world economy is still there. In 2015 Andrew Haldane, the Bank of England’s financial stability chief, suggested that not even the regulator can know what banks really own and owe because they are still allowed to hide so much off the balance sheet.

It is worth recalling just how close we were to unimaginable disaster after Lehman Brothers failed in September 2008. Since nobody in the sector knew what other banks’ real status, pure panic broke out. The entire global financial system threatened to collapse. As the then president of the European council, Herman Van Rompuy, admitted (years later): “We came within millimetres of a total implosion” – an implosion that would have meant hundreds of millions of people discovering that they had lost access to bank accounts, and that supplies to supermarkets, pharmacies and petrol stations had stopped.

With a lot of luck and very expensive emergency measures, an economic cardiac arrest was averted. At the time few insiders were open about the danger the world economy was in, for fear of provoking the very panic that threatened the system. This was probably wise: but the consequence is that few outsiders are aware of the threat posed by the system in its current form. And without public awareness of the need for a genuinely different financial sector, there is precious little political capital in truly taking on the banks and their accomplices.

So, the short answer as to why no top banker lost his (they are always men) fortune when their banks went bust and required bailouts or nationalisation? It’s politics. There was too little political capital and almost no political will among mainstream parties to break up the banks and make them small and simple again – let alone to take on the “top” bankers and at least take away the bonuses paid out to reward profits that in 2008 proved illusory.

Indeed, as soon as the shock of the Lehmans moment subsided, the banks went on the offensive again. In America the financial lobby has been able to make the Dodd Frank legislation – brought in after the crash to make things safer – all but unworkable. Huge campaign donations helped “financial business-friendly” politicians get elected and re-elected. Those presidents, prime ministers and finance ministers who stayed within the lines set by the financial sector were rewarded lavishly. Some got lucrative speaking engagements – Hillary Clinton’s $200,000 speeches to Goldman Sachs come to mind. Others found new work after their time in politics was over, with Tony Blair taking a reported £2m a year as a fixer for JP Morgan. George Osborne, Britain’s former chancellor, was the latest big name to join the industry, netting about £650,000 for four days a month at the US fund manager BlackRock.

Whether Theresa May ends up with a City job paying huge rewards remains to be seen. It can’t hurt her chances that the Tory election manifesto promised to scrap the Serious Fraud Office – the body that has now brought charges against the Barclays bankers.

How to pitch articles to editors

June 24, 2017 yccadmin Comments Off on How to pitch articles to editors

test for the permalink

July 4, 2017 yccadmin Comments Off on test for the permalink

June 24, 2017 yccadmin Comments Off on FOOD is LIFE
Interview News

Jailing Barclays bankers won’t save us from another financial crash

June 24, 2017 yccadmin Comments Off on Jailing Barclays bankers won’t save us from another financial crash
Editor

How to pitch articles to editors

June 24, 2017 yccadmin Comments Off on How to pitch articles to editors
Thoughts

June 24, 2017 yccadmin Comments Off on Science Heroes at Work
Business

June 21, 2017 yccadmin Comments Off on TAKING ROMANCE IN NIAGARA TO NEW HEIGHTS